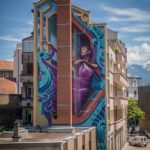 "Girl behind the chimney" | WD

« This mural project was rather an adventure for me. When I first proposed the wall, I was excited because it was tricky enough and giving me much of inspiration and creativity. When I sent the design all parts – the festival, the owner of the building and the Church that owns the chimney – said yes! But a couple of weeks later – when even the paints for the mural had been bought – I was contacted again by the festival and people told me that Church has changed its mind, has rejected the design and I was not allowed to paint there. The design was science-related, as Grenoble is an important scientific center among others. It was about electricity/light and Apollon – the god of Light according to ancient greek mythology – was part of the mural. After this last moment fact they proposed me another wall, a plain one, which I didn’t find it the same inspiring indeed. So I decided to go for the challenge! To paint something that I’d be proud of, without touching at all the chimney, Church’s forbidden property. It took me quite long to find the idea… I wasn’t allowed to paint on the chimney but, no one could ban me from including the chimney in my mural. So I just used the « forbidden » chimney as part of the harp and, the mural « Girl behind the chimney » was born. The funny thing is that even some people connected with the Church were happy with the mural, at the end. But they were quite embarrassed with the media that had exposed their refusal and the impact of this publicity, people’s feedback etc. I really enjoyed this project and I hope people living or visiting Grenoble will enjoy my mural too. » (Texte officiel Wild Drawing)